Unlocking the Greatness of Minecraft

Minecraft!  That’s all I heard about for 6 months when my son, Zach was in Kindergarten.  After 6 months of non-stop chatter about wanting (and needing) Minecraft, my husband and I finally gave in and downloaded it for him on my desktop computer.

We did some research on it, and checked it out at commonsensemedia.org, where it got a very positive review.  If you haven’t discovered Common Sense Media, and you have a child who loves video games, you might want to check it out.  Their tag line is We rate, educate, and advocate for kids, families, and schools.  I use it for almost all games and movies (and anything else) my kids ask about that I haven’t heard of yet…

When we first started playing Minecraft, he needed a little bit of help, so my husband and I took turns – one of us would sit at the computer with him and work together to figure out this Minecraft thing, and it wasn’t long before we were both volunteering to be the one to help him out.

Yes…my husband and I were both quickly captured by and sucked in to the Minecraft craze that was sweeping the nation…  We found ourselves excited to help him out, and we knew we had a serious problem when we found ourselves playing Minecraft together late into the night when the kids were asleep.

Here is a screenshot of one of the many worlds that I’ve played on with Zach. This is in “creative” mode.  It allows you access to all the blocks and supplies you need.  Can you see the 2 houses on the left and right of the picture?  Pretty nice, huh?  Minecraft is great.  It’s like having the ultimate Lego set with all the pieces you will ever need. And look at the sunrise. Beautiful, right?

The reason we played late at night while Zach was sleeping was for research purposes….  At least that’s what we kept telling ourselves.  We wanted to know how to do things that Zach might ask us about, so we spent our evenings creating our own worlds, building houses, farming, defeating zombies, skeletons, and mining for iron and coal hoping that a Creeper wouldn’t sneak up on us when we weren’t looking and blow up whatever we were working on.

Okay wait…did I really just admit that to you?  Yes…I did.  And I’m okay with that.  Especially after all the articles I’ve been reading about Minecraft lately.  I was reading an article titled Everything You Need to Know About Minecraft and found out some interesting information.  I learned that it is one of the best-selling video games ever that was independently developed and published.  Pretty cool, right?  Can you imagine being the genius behind this game?

So…there are many reasons why I think it is okay to let your children play Minecraft.  I loved it before, but after going on Totally the Bomb, and reading an article titled This Is Why Your Kids Like Minecraft I loved it even more.  Basically, it says that Minecraft is like an open sandbox – kids can explore, create, and have fun while fighting zombies and creepers and much more…   It was because of articles like this that I didn’t feel bad when there were days where I looked up from the computer, and we (I mean Zach) had been playing Minecraft for over an hour!  Yikes…

Here is a screenshot of the inside of one of the houses we (I mean Zach) built.  Bookshelves, a fireplace, paintings, beds, and more.  Pretty amazing stuff, right?

If you haven’t seen it, it looks like a version of the original Donkey Kong, Adventure, or Asteroids (or any of the old 80s games) – remember when those games came out and we thought they were the most amazing thing ever?  Or how about the Atari  2600.  Remember that?

The graphics (at the time) were totally captivating.  But…compared to what my kids play today – it’s nothing.  However, the simplicity of Minecraft, and my old Atari 2600 games, seem to grab the attention of my kids and their friends like nothing else.

And what’s even better, is that you can still get these games if you buy the Atari Flashback!  It’s all the Atari 2600 games in one system.  Amazing, right?  I’m always shocked at the fact that my kids love my old Atari 2600 games as much as I do.  The graphics are terrible, but wonderful all at the same time!

We bought one of these for my Dad last year.  He was a big fan of River Raid – one of the original Atari 2600 games with terrible graphics as well, but there was something about that game that we all loved.  Now when we go to see Gammy and Gamp, we plug in the Atari 2600 and kick it old school!

Back to Minecraft.  This game lets kids enjoy creative thinking, learn about geometry, and even learn a bit of geology as they build structures out of different kinds of rock (blocks).  I was shocked when Zach first started telling me about how he had discovered and built a dwelling with Diorite, Granite and/or Andesite.  What?  I totally snoozed through my geology class in college, so I had no idea what he was talking about.

There are also many studies that show how effective Minecraft (and other video games) are at helping children learn how to read.  I enjoyed reading the article How Video Games Like Minecraft Actually Help Kids Learn to Read.  In this article, the author said after testing the reading complexity of many “How To” guides for Minecraft, he discovered that the reading level of many of these fell between grades 8 and 11!  Wow!  And most of these games are being used to help children in elementary aged classes.

John Dewey, one of the most significant educational thinkers of the 20th century once said “To get kids reading & writing, give them a real-world task they care about.”  In today’s world, kids care a great deal about their video games.  And in my house – Minecraft is at the top of the video game list!  That is the reason that if you give a child a book about a game they love, they will read it from beginning to end!  Without complaints…

I often watch Zach read through his “How To” books for Minecraft and other games, and I’m impressed with all the things he learns from them.  Minecraft has very little instruction with it when you are playing the game (no on-screen directions), so to figure out how to succeed, you have to read manuals or watch YouTube tutorials.

Zach preferred the manuals in the beginning – that way he could easily refer back to pages again and again.  He also enjoyed the colorful pictures – they always gave him good ideas of what (and how) to build things.  We have several Minecraft How To and Strategy Guide Books…

And now, there are also a lot of novels written for elementary aged children – usually about a child who gets sucked into his Minecraft video game and is suddenly stuck there in the world of Minecraft.  We have read several of these together and love reading about how the main characters survive by using their knowledge from the game about farming food, defeating Zombies, and avoiding Creepers!

If you click here you will link to a list of several Minecraft Adventure Novels.  If your child loves the game of Minecraft, he/she will love these books.  It’s the next best thing to playing the game!  And the link below will take you to book #1 in the GameKnight999 series – one of Zach’s favorite Minecraft series!

Like I said, Zach has several instructional books on Minecraft, but he also has a favorite You Tuber named Paul Soares, Jr.  He is one of the You Tubers who uses appropriate language and makes Minecraft videos that are just right for kids in elementary school.  He must be about my same age, because he often makes funny references to the 80s (yes…I’ve watched a few of his videos with Zach).  Just the other day, Zach was talking about The Addams Family – I asked him how he knew about it, and he said “Paul Soares, Jr. talked about it on his video.”

You can find Paul Soares, Jr. in many places.  He is on Facebook, Twitter, and he has his own You Tube Channel with all of his Minecraft videos (I think we’ve watched them all).  This is a great place to start if you have a child needing some instruction and Minecraft just isn’t your thing.  Leave the tutoring up to Paul!

Minecraft is available on many different platforms.  As I said earlier, in our house, we (I mean Zach) play on Apple Computers.  But it is available on almost all game systems…  We are an Apple household, so naturally we play on our computers.  We have a Minecraft server set up so Zach can play on his computer while his buddies can use my laptop and they can play together – in the same world at the same time.  Wish you all could hear the conversations that take place in my house while this is happening…  It’s very entertaining!

If you don’t enjoy having your child play on the computer, don’t worry.  They can still be a part of the Minecraft Craze!  There are all kinds of Minecraft Toys – paper blocks, magnets, and of course, Minecraft Legos!  So many to choose from – your kids have all sorts of options when it comes to this craze.  So…search around and find the Minecraft toy that is right for you (I mean your child).

If you haven’t tried playing Minecraft, you need to check it out.  Just be careful…it’s fun and quite addictive.  Like I mentioned before, my husband and I found ourselves staying up really late at night playing Minecraft well after our kids had gone to bed.  The first step for us was to admit we had a problem…  Now we only play when Zach asks us too (for the most part)!  Have fun, and good luck.  And…make sure you have a place to hide before nightfall, and collect lots of extra coal – you will need it to cook your food.  Until next time…

Even Morgan joins in for some Minecraft fun. However, she likes creative mode because she can choose pretty colors for her houses!! 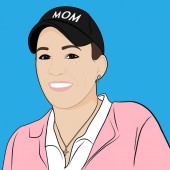